Cablinc is a fictitious company facing very real and common challenges. It was put together specifically to be used as the foundation for talks at Social Now.

The company was created in 1983 to manufacture electrical supplies (cables, etc.). Since then it has opened a project-based line of business: design, auditing and maintenance of electrical installations in large buildings.

Its headquarter is in the UK. It has plants in the UK, Portugal and Slovakia. 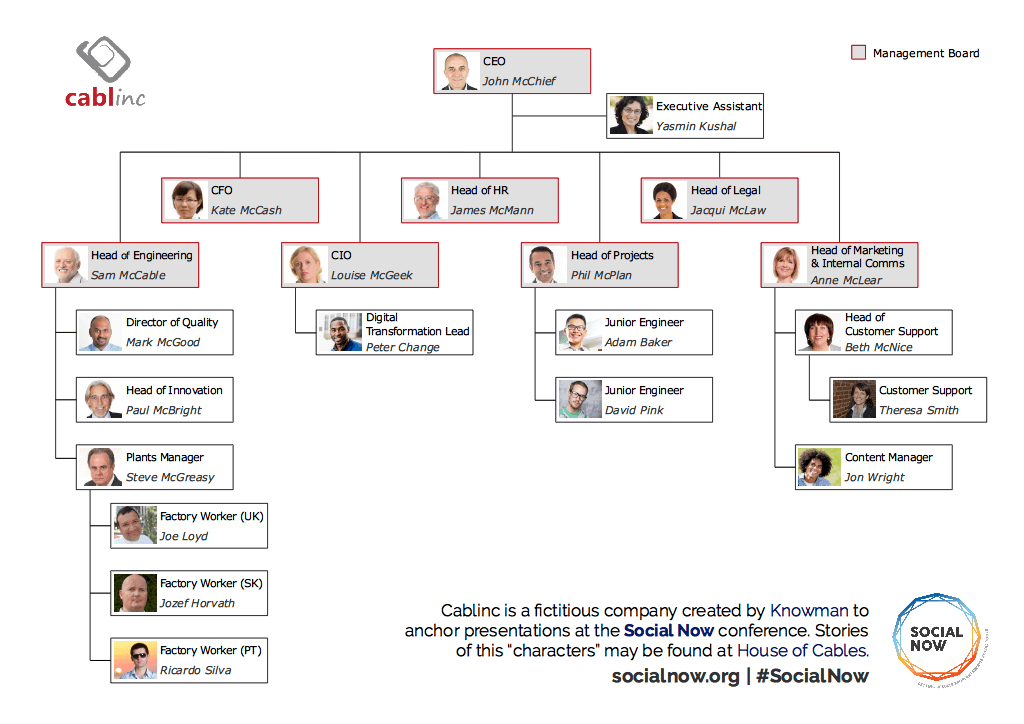 The challenges Cablinc is facing are described in Anne McLear’s blog and summarised bellow.

A lot of communication happens in the cafeteria and rumours play an important part in Cablinc’s life. When Cablinc decided to open the factories in Portugal and Slovakia, communication was not done properly, staff assumed they would be closing the UK factory and morale dipped.

Communication with factory workers is done mostly via a paper newsletter which only reaches a small number of staff – because not enough copies are printed.

One day a machines broke in the UK factory. It was down for almost 2 days. Staff knew this failure was likely to happen but was not too sure about who and how to communicate it because their managers’ priorities were conflicting.

Anne McLear is responsible for creating and managing a communication plan for the opening of the new factory in Turkey. That plan should involve communicating with staff but also with partners.

Anne McLear joins Cablinc. For 1 month, her predecessor, Joan McChatty, works alongside her to ease Anne into her new job.

The Projects team, led my Phil McPlan, is underperforming because Cablinc has a very junior team of field engineers who, when on the field, have little chance to tap into the company’s pool of knowledge (and more senior colleagues).

Some junior engineers have created a sort of a community of practice who, informally, meet at the cafeteria to discuss tricky projects.

In preparation for the communication plan she has to put together for the factory opening in Turkey, Anne McLear wants to know what was done when opening in Portugal and Slovakia. However, there is no written material and it’s hard to pinpoint those involved at the time. She’s planning a peer assist involving colleagues from the 3 factories.

One day a machines broke in the UK factory. It was down for almost 2 days. The machine was then fixed by a retired Cablinc employee who was called in to help.

Factory workers knew this failure was likely to happen sooner than later. However, they did not know how to report it. Mark Good, Head of Quality, feels this would not get Cablinc re-certified with ISO 9001:2015 now that access to knowledge is explicitly stated as a requirement.

There is a fire at a client’s building where Cablinc had performed a quality inspection. Jacqui McLaw anticipates a lawsuit and is keen to access all available knowledge and information about the client, the work done, the issues identified, etc.

Anne McLear invites all staff (office and factory workers in the 3 countries) to put forward ideas to improve internal communication. Ideas can be posted on a notice board in the cafeteria, in a box by the reception desk or sent by email. 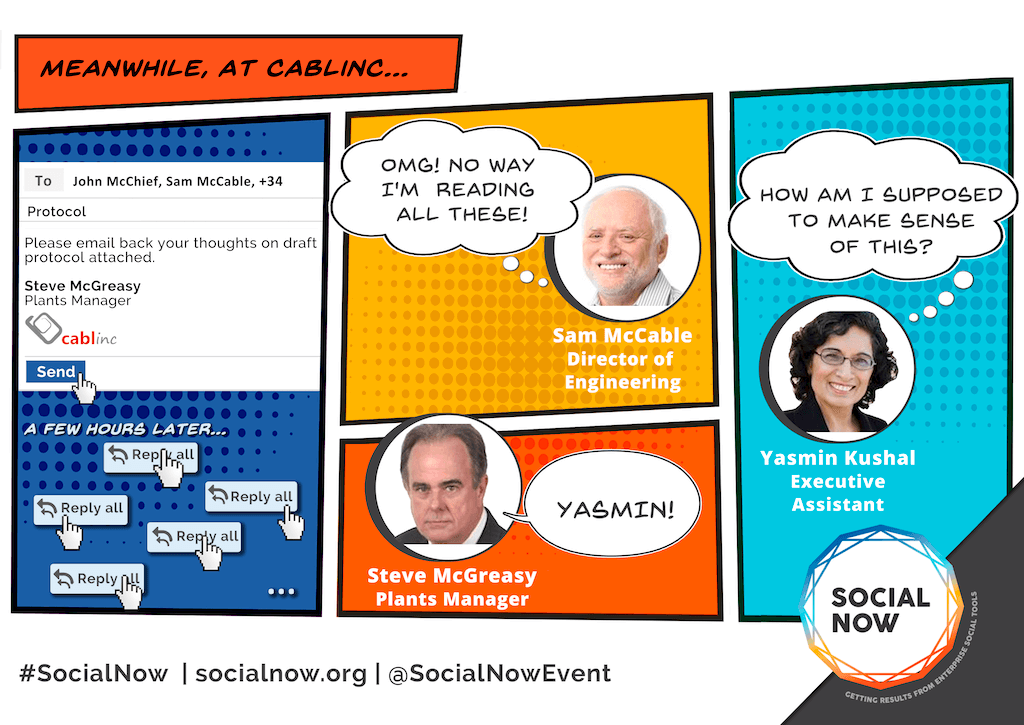 Co-creation of documents is done via email, including meeting notes.

Sam McCable introduced a tool for his team to share status updates. Steve McGreasy, whose team is now coming under McCable, resists the tool as he does not see the value.

Anne McLear is off sick for over a week. Apart from email she has access to no other “systems”. As most of her documents are stored in the shared drive, in private folders, her colleagues have no access and redo the work.

With the new factory opening in Turkey, Cablinc needs to set up a team capable of delivering to the quality standards the company is committed to. James McMann, Head of HR, also needs to ensure the new staff members embrace the culture of the company and quickly feel part of Cablinc.