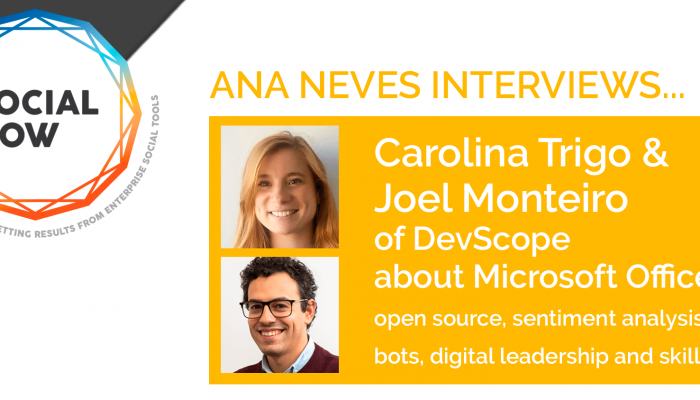 In the warm-up to this year’s Social Now, Ana Neves interviewed Carolina Trigo and Joel Monteiro of DevScope. Together with her colleague Daniela Oliveira, Carolina will go on stage to show how Cablinc would operate with Office365 available to their staff.

In this interview, Carolina and Joel share their thoughts and experience on the power of Office365, the reasons for not choosing Office365, the role of bots, sentiment analysis on intranets, damaging decisions to the success of an intranet, and the need for digital leadership and digital work habits.

“Office365 suite is like a Swiss army knife. It has all the tools a company needs to improve their work.” Carolina Trigo

“I don’t think the open source market is gaining enough traction to detract us from recommending Office 365. Although I do respect the movement, I don’t think it affects the business that much.” Joel Monteiro

“One recurring mistake on intranet portals is the roll out. Marketing and Communications are not doing enough of an effort to get all their clients and employees onboard; they don’t make an effort to explain to them how things are going to change from now; and that usually leads to low adoption rates and people still resorting to old ways which kind of undermines the whole thing.” Joel Monteiro

Other interviews in this series: Patrick Allman about MangoApps, Phil Kropp about Workplace by Facebook, Raúl Ramos Ribeiro about DiggSpace and Simon Cooper about QUBE